A look at how hospital construction priorities have changed since the start of the pandemic, how activity has been affected and what the key considerations are.

During the Covid-19 pandemic, construction firms have encountered similar challenges to other sectors employing key workers; staff shortages which have been exacerbated by the closure of borders and the lower number of workers from overseas arriving in the country, social distancing and vaccination requirements for those working on site and a series of imposed restrictions including periods of shutdown and capped activity.

But there is some good news. Progress during the pandemic has actually been better than expected, probably helped along by additional funds being made available. Hospital sites being less busy and buildings being temporarily out of use may also have helped accelerate the pace of projects. Not only have most construction work finished on time; some projects have even been fast tracked.

We have looked at Australia specifically, but this trend – along with a general increase in new projects and additional funding being announced – are mirrored in other countries, including the UK. According to Barbour ABI, which tracks planning applications and construction projects across the UK, contract awards in the healthcare sector in November 2021 alone reached £500m – near record levels – with the pipeline looking very strong. 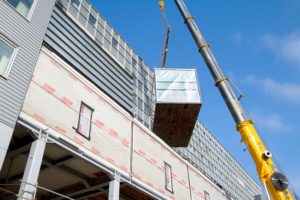 Looking at Australia, for example, the $341.2 million Concord Hospital redevelopment in New South Wales is to be delivered ahead of schedule to provide dedicated care for patients with Covid-19. Many other projects have been fast tracked or got an early start, including the A$750 million Royal Prince Alfred Hospital Redevelopment and stage 2 of the A$1 billion Nepean Hospital Redevelopment, which will be brought forward by two years.  In fact, during 2020, Health Infrastructure NSW delivered its largest ever health capital spend, with A$2bn worth of infrastructure projects delivered.

In Victoria, construction is underway on a A$1.5 billion project to deliver a new Footscray Hospital – the largest ever health infrastructure investment in the State – which is expected to open in 2025. The government has also substantial funds for the upgrade of vital health infrastructure, including a new $200 million Metropolitan Health Infrastructure Fund (MHIF), and it also opened a fifth round of the A$120 million Regional Health Infrastructure Fund (RHIF) earlier in the year. Looking more long-term, Infrastructure Victoria issued an updated 30-year Infrastructure Strategy back in September, to reflect the unprecedented levels of investment to meet the challenges of the Covid-19 pandemic and to ensure the state is prepared for the future needs of its population.

In Western Australia, the government announced – in addition to ongoing projects – funding of A$400m to expand hospital capacity, to include both bedspaces and staff. The investment is said to be one of the biggest ever in Western Australia’s health system and will create more than 500 bedspaces across various hospitals, and support the addition of more than 400 nurses.

In Queensland, a new $265m Satellite Hospitals Program (SHP) is in planning. It will involve building seven new satellite hospitals to meet the healthcare needs of rapidly growing communities across South East Queensland. They will deliver a wide range of services including community health,  chemotherapy, urgent care for minor injury and outpatient services. Last year, the Queensland government also announced funding of $163.7m for the creation of additional 351 beds across the state’s hospital network.

The planning phase for hospital building projects usually starts with a clinical services plan, based on need. Following a consultation exercise, this then evolves into a master plan, and is outlined in a project brief and the business case. Starting with the concept, the design process that follows moves through stages from schematic design and into more detailed designs.

Key considerations during the planning and design phases include how core services will operate, as well as how these services will work alongside surrounding or ancillary services. Any functional requirements of the building, what utilities or services need to be accessible from where, and how staff and patients will use the hospital space, as well as how they will get to and from the hospital, also need to be considered.

New hospitals will need to serve the surrounding population for many years, so looking further into the future is necessary. How is the hospital likely to be used in the future? Will there be enough space to accommodate the local population in 30 years’ time, and will it suit the age and attendance profile? Modelling tools are becoming ever more advanced, and it is now possible to create scenarios to predict the effect of a new build on the economy and the population over time. However, modelling can rarely account for the effects of an unplanned event, such as the Covid-19 pandemic, which is likely to change the way we look at capacity planning in the future.

The need for flexibility

As a result of the pandemic, we have seen some of the longer term trends accelerate, and this needs to be included at the design stage – the future may arrive sooner than initially expected. Climate change is gaining more attention and is being prioritised higher than before, and there is pressure to reduce timelines for addressing the issue. Therefore, a stronger focus on energy efficiency, sustainability, recycling and minimising waste, reducing water use and using renewable energy sources is needed.

The changing climate has also brought a need to design for greater resistance to extreme weather events, such as fires, flooding and storms, and in combination with the arrival of Covid-19 has brought to the forefront a need for resilience in the unexpected events in general.

Hospitals are busy places, and something else that needs addressing is the potential disruption to essential services to the community during the construction phase. For that reason, hospital projects are often delivered in stages. Unfortunately hospital projects, even when staged and carefully planned, can be both large and complex, and delays or disruption to works are not uncommon. It is advisable to plan for the implementation of temporary healthcare infrastructure, to help bridge the gap in the case of such an event occurring.

Flexible healthcare solutions, such as modular or mobile facilities, can be used both on a short-term basis, from periods of weeks or months, or more long term, ensuring the delivery of essential services can continue without a hitch during a major construction project taking several years. Modular has many advantages over traditional builds – not least the speed at which they can be built.

The healthcare construction sector looks to be experiencing a bit of a boom at the moment, which may continue for years to come if the growing pipelines are anything to go by. Covid-19 has forced us to consider various ‘what if’ scenarios and review contingency plans. It has also brought a realisation that more capacity – and flexible capacity at that – is needed to be able to cope with events such as a pandemic.

The Australian state of Victoria’s 30-year infrastructure strategy contains some useful insight into the potential future needs that will be essential to incorporate into plans. In a healthcare context, they include addressing the energy transition to meet future net zero emission targets, including the use of zero emission vehicles, and considering water usage. It also points out the importance of embracing technology and innovations in healthcare – including the expansion of telehealth/e-health services – and accommodating these.

We need to plan for population growth overall, but also for accelerated growth in certain areas. There is a need to expand the use of climate scenarios and modelling tools, and expanding information sharing capabilities for best results.  Above all, there is a need to embed resilience into healthcare systems to be able to respond to national emergencies or other unexpected events without disrupting either urgent or planned healthcare service provision.