The Northern Älvsborg County Hospital (NÄL) is an emergency hospital that conducts almost 9,000 planned and emergency operations every year. In the existing premises, which have been in use for about 30 years, there have been repeated roof leaks in recent years, which eventually became an acute problem.

“This meant that one of the operating departments was closed rather quickly. However, in order to maintain services as an emergency hospital, there must be a certain number of operating rooms,” says Diana Cagner, Project Manager at Västfastigheter, who manages the hospital property.

Since a renovation process takes several years, a quick alternative was needed to keep operations up and running. The solution involved temporary replacement facilities in the form of module operating rooms. A solution that Region Skåne has used before for a hospital in Malmö.

“In October 2020, we wrote a tender request document that was largely based on the needs and wishes of the business. It was important to include all the elements that the business, and we as property owners, cannot compromise on. These became our requirement specifications. The procurement process complied with the Public Procurement Act (LOU), and the tender request was released at the beginning of November. We received two tenders, one of which met the requirements we requested,” explains Diana Cagner.

“On 22 December 2020, we signed an agreement, with work to prepare the ground next to the hospital starting mid-March 2021. About a month later, all 54 modules arrived from Holland via truck and boat, and were put in place with a large crane over the weekend of April 24–25,” continues Diana Cagner.

“The modules consist of four operating rooms with corresponding preparation rooms, a material storage room that is 50 m2, a sterile storage room of 25 m2, disinfection rooms and a long corridor from the existing building to the operations modules to allow personnel to maintain a similar workflow that they are used to,” explains Diana Cagner.

The operations modules are equipped with utilities connected to the existing hospital in the form of heat, cooling, gas, hot and cold water, automatic sprinklers, drains, electrical power, telecom data, fibre optic cable and more. Ventilation and an uninterruptible power supply are located together on a maintenance floor above the operations modules. 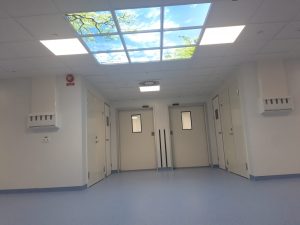 The modules are connected to the existing hospital in two locations; a hallway to bring patients back and forth from the module, as well as another hallway for staff and sterile material.

“The heavy steel structures with cast floor joists are stable, and the interior has an authentic design, so that visitors to the building don’t even notice that they are inside modules.”

“Despite the complexity, we have kept to the schedule and budget, only the sliding doors to the operating rooms and preparation rooms were two weeks late. Everyone has been solution-oriented and has done their utmost to keep on schedule. At the end of June 2021, the final inspection will be completed. A great deal of thanks goes out to all those involved,” says Diana Cagner.

For Q-bital Healthcare Solutions, this is the second operating room module project in Sweden that they have delivered.

“we can offer a complete solution tailored to each customer’s needs,” says Ove Almersson, Country Manager, Nordics at Q-bital.

“For this assignment in Trollhättan, we created operating room modules where nothing has been left out. Fitted out with the latest technology, including image processing software and 3D communications with monitors to provide staff with clear images. Each operating room has a large screen recessed into the wall and a built-in camera that makes it possible to monitor the operations. We have also thought about the comfort and working environment by creating skylights,” explains Ove Almersson.

One major challenge has been to solve the logistical issues of accommodating so many different trades, in a limited area, and for such a short time. While at the same time, everyone has to keep their distance.

“Each morning, we reviewed who is working where and what trades are to be completed. A lot of issues had to be solved on site afterwards, but all the subcontractors did a fantastic job solving what was needed,” says Ove Almersson.

“We will also see more of this kind of solution. To build up a complete care unit in a short time that can be used on a temporary basis over a long period of time and that enables operation to quickly get started and produce results,” concludes Ove Almersson.